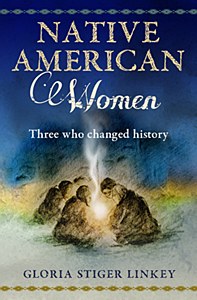 In this book, Gloria Linkey profiles three remarkable native american women who helped shape the history of the Pacific Northwest.

Starting with Sacagawea, who served as translator and peacemaker for Lewis & Clark and the Corps of Discovery on their journey west to the shores of the Pacific ocean, Linkey then tells the stories of two less well known, but still remarkable and couragous women...

Watkuese, of the Nez Perce, who as a child, like Sacagawea, was captured by an enemy tribe. Forced into the hard and cruel life of a slave, she ended up far from home on the eastern side of the country. She was finally sold to a white man who took her as his wife. After several years of living as a slave among her kidnappers, Watkuese found kindness with her husband and the other white people who lived near them.

When she learned that the man planned to return with his new family to his native country across the Atlantic, Watkuese left, with her infant son, on an arduous cross-continent journey to return to her people. Years later, recalling the help and kindness she had been shown by the white people, she defended the Corps of Discovery when the Nez Perce tribe threatened to turn against them.

Third is the story of Marie Dorian, a native american woman who made the difficult overland journey with the Astorians, who were sent by John Jacob Astor to establish a fur trading post at the mouth of the Columbia in 1810. In 1813, her husband and a number of other fur trappers were killed by a hostile native raiding party, forcing Marie and her two young sons to survive 50 winter days in Oregon's Blue Mountains before reaching the safety of a Walla Walla village.

This book tells their stories, their hardships, their endurence, and, how each of them had a hand in shaping the history of the Pacific Northwest.