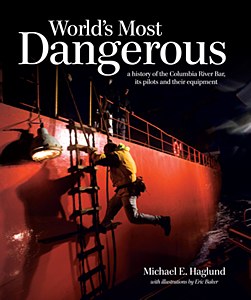 a history of the Columbia River Bar, its pilots and their equipment
by Michael E. Haglund

For two centuries, the Columbia River Bar has been called one of the world's most dangerous passages. The loss of nearly 2,000 ships has earned the Bar the moniker "Graveyard of the Pacific"

But a reputation based on explorers' accounts and wrecked hulls is open to argument. This book definitively establishes the Columbia River Bar as the world's "most dangerous" based on science: the unique geologic history of the Columbia River's relatively young mouth is what produces its unparalleled propensity to generate waves that can topple the world's largest ships. In all the world, there is no place where it is more critical to have a pilot.

And nowhere in America are the standards higher for a maritime pilot's license than for the Columbia River Bar. Applicants must have two years of sea time as a ship captain with an unlimited license- any ocean and any ship.

This book tells the story of the Columbia River Bar; its formation during the cataclysmic Missoula floods which blasted away an earlier mitigating delta, the building of the jetties to stabilize the shipping channel, the adventures and tragedies of the bar pilots and their operators, and finally the equipment used by the pilots to transfer to and from great ocean-going ships.